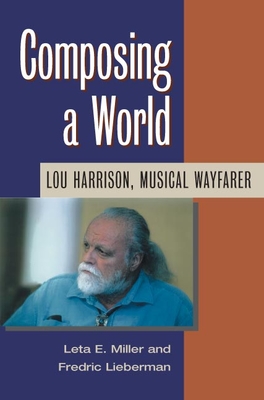 By Leta E. Miller, Frederic Lieberman
$51.87
If not in stock, we can Special Order from the publisher

Composing a World is the definitive work on Lou Harrison, the prolific California composer often cited as one of America's most original and influential figures. The product of extensive research, including seventy-five interviews with the composer and those associated with him over half a century, Composing a World includes chapters on music and dance, intonation and tuning, instrument building, music criticism, Harrison's political activism, homosexuality, Asian influences, and final years.

This edition features an updated catalog of works reflecting compositions completed after 1997. It also includes an annotated work list detailing more than 300 compositions and a CD featuring over seventy-four minutes of illustrative Harrison compositions, including several unique and previously unrecorded works.

A compelling and deeply human portrait, Composing a World offers an indispensable study of a beloved musical pioneer.

"Garrulous and loving, remarkably successful in distilling abstruse musical manipulation--e.g., the mathematics governing the many kinds of tuning in Harrison's music--this is one of those rare musical biographies that draws you close to the subject with words of kindness rather than scholarly gobbledygook or scabrous patter."--Alan Rich, San Francisco Sunday Examiner

"An inspirational assessment of the American maverick."--BBC Music Magazine

"[S]eemingly manages the impossible in striking a perfect balance between convention and alterity, seriousness and humor, scholarship and celebration, erudition and readability, macrocosm and microcosm . . . A minor musicological miracle."--David Nicholls, Notes