Coming Together: The Cinematic Elaboration of Gay Male Life, 1945-1979 (Paperback) 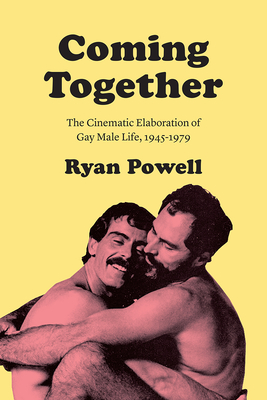 In Coming Together, Ryan Powell captures the social and political vitality of the first wave of movies made by, for, and about male-desiring men in the United States between World War II and the 1980s. From the underground films of Kenneth Anger and the Gay Girls Riding Club to the gay liberation-era hardcore films and domestic dramas of Joe Gage and James Bidgood, Powell illuminates how central filmmaking and exhibition were to gay socializing and worldmaking. Unearthing scores of films and a trove of film-related ephemera, Coming Together persuasively unsettles popular histories that center Stonewall as a ground zero for gay liberation and visibility.  Powell asks how this generation of movie-making—which defiantly challenged legal and cultural norms around sexuality and gender—provided, and may still provide, meaningful models for living.

Ryan Powell is assistant professor of cinema and media studies at The Media School at Indiana University, Bloomington.

“Essential. . . Few books are as important to a field of study as Ryan Powell’s Coming Together is to queer film history.”
— Choice

“A brilliant, often enthralling, work of history and historiography. Coming Together gives us a fascinating and meticulously researched account of the development of the collective self-fashioning of gay men from the end of World War Two to the late 1970s, and of the central role filmmaking and filmgoing played in that process. At the same time, it asks us to examine key historiographic issues, such as what counts as part of film history beyond the films themselves; the role of film analysis in social history; and the idea that history may be understood in terms of sudden turning points (as Stonewall is so often perceived). All this is wonderfully held together by the way Powell explores and runs with the terms used by and about gay men; the spatial resonances (in and beyond films) of being ‘underground’ and coming ‘out’; and the multiple implications of ‘coming together’ as historical process, social practice, and erotic ideal. A book as delightful and stimulating as it is rigorous and lucid.”
— Richard Dyer, author of Now You See It: Studies on Lesbian and Gay Film

“A groundbreaking study of the great variety of gay cinema that emerged in the United States after World War Two. Through close engagement with these movies, Powell movingly shows us how much the elaboration of gay male life owes to the storytelling power of all types of films.”
— Michele Pierson, author of Special Effects: Still in Search of Wonder