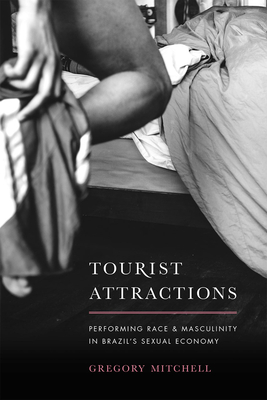 By Gregory Mitchell
$119.70
Special Order from the publisher

While much attention has been paid in recent years to heterosexual prostitution and sex tourism in Brazil, gay sex tourism has been almost completely overlooked. In Tourist Attractions, Gregory C. Mitchell presents a pioneering ethnography that focuses on the personal lives and identities of male sex workers who occupy a variety of roles in Brazil’s sexual economy.

Mitchell takes us into the bath houses of Rio de Janeiro, where rent boys cruise for clients, and to the beaches of Salvador da Bahia, where African American gay men seek out hustlers while exploring cultural heritage tourist sites. His ethnography stretches into the Amazon, where indigenous fantasies are tinged with the erotic at eco-resorts, and into the homes of “kept men,” who forge long-term, long-distance, transnational relationships that blur the boundaries of what counts as commercial sex. Mitchell asks how tourists perceive sex workers’ performances of Brazilianness, race, and masculinity, and, in turn, how these two groups of men make sense of differing models of racial and sexual identity across cultural boundaries. He proposes that in order to better understand how people experience difference sexually, we reframe prostitution—which Marxist feminists have long conceptualized as sexual labor—as also being a form of performative labor. Tourist Attractions is an exceptional ethnography poised to make an indelible impact in the fields of anthropology, gender, and sexuality, and research on prostitution and tourism.

Gregory Mitchell is assistant professor in the Women’s, Gender and Sexuality Studies program and affiliate faculty in the Department of Anthropology and Sociology at Williams College.

“A valuable and insightful book about how sex works to both frame encounters between foreign tourists and Brazilian sex workers, and also to complicate and extend the impressions and the relationships that result from those encounters. The focus on male sex workers is welcome and overdue, and the attention to eco-tourism, African-American ‘roots tourism,’ and the way that some client-sex worker relationships develop into transnational queer families is eye-opening, fresh, and fascinating.”
— Don Kulick, author of Travesti: Sex, Gender, and Culture among Brazilian Transgendered Prostitutes

“Melding current theories of affective labor, queer kinship, and racialized desire with his own intimate, ethnographic accounts, Mitchell offers bold and fresh insights into a range of contemporary touristic cultures in Brazil. This is a fascinating addition to the literatures on global sex work, sex tourism, and neoliberal sexualities.”
— Elizabeth Bernstein, author of Temporarily Yours: Intimacy, Authenticity, and the Commerce of Sex

“Tourist Attractions not only holds its own, but in fact stands out as a new and innovative study within a field that is noteworthy for its strength. Mitchell brings the legacy of this scholarly tradition into meaningful dialogue with a range of other literatures that have emerged on issues like sex work, tourism, and race relations. He offers rare insight into the context of commercial sex and gives readers the lived experience of a social system in all its richness and complexity. This book is a tour de force.”
— Richard Parker, director, Center for the Study of Culture, Politics and Health, Columbia University

“Mitchell’s education and training in ethnography allow him to place the sex workers and the gringos in a larger context and see them in a way that they cannot see themselves. And the rest of the writing is so good, so full of the ironies produced when gringo and garoto give their views of the sexual exchange that both united and divides them that one puts up with the academic theorizing. . . This is a well-written study that will interest anyone drawn to Brazil and its variously beautiful men.”
— Gay & Lesbian Review

“Mitchell’s point of departure—a critically important, contemporary topic of forbidding complexity—sets the tone for a bold and occasionally unsettling investigation. . . . The book’s chief strength lies in its collection and contemplation of the subjective experiences of clients and workers. Mitchell insightfully seeks to uncover the roles played by racial fetishization, local and global inequalities, and gendered fantasies in structuring gay sex tourism in Brazil. His years of interviewing and getting to know the dozens of subjects with whom he worked yield rich examples of answers to questions about those roles.”
— Canadian Journal of Latin American and Caribbean Studies

“This is an intimate and innovative ethnography on male sex work in Brazil. Building on research in three Brazilian cities (Rio de Janeiro, Manaus, and Salvador) from 2006 to 2015, Mitchell adeptly fuses theories of affective labor, eroticized authenticity, and queer kinship to develop a nuanced analysis of how shifting performances of masculinity and race shape not only sex workers but also their clients, girlfriends or wives, and families. In studying these complex sexual economies, Mitchell artfully connects rich ethnographic data, including extensive participant-observation in sex work locations and interviews with 50 sex workers and 40 foreign tourists, to broader themes of sexual subjectivities, sex tourism, gay consumerism, and contemporary neoliberal capitalism. . . . Tourist Attractions will appeal to a broad readership and would be a great ethnography for undergraduate and graduate courses.”
— American Ethnologist

“Adds new vibrancy to the literature on the relationship between global sex work, travel, and business. We gain insight into local cultures of eroticism and the performance of masculinity/femininity within raced, classed, and internationalized settings.”
— Gender & Society

“A noteworthy ethnography that contributes to the study of sex tourism, sex work, Brazilian sexuality, gender and sexual performativity, gay consumerism, and racial identity formation. . .Mitchell avoids a simplistic rendering of the garotos as exploited and powerless laborers of the Global South and their clientele as lecherous and malicious masters of the Global North. Instead, he skillfully depicts them as fully formed and embodied individuals.”
— Journal of Latin American and Caribbean Anthropology

“Tourist Attractions tackles a difficult subject: the intimate sexual economies between men inserted in very different places and positions, juggling contradictory layers of stigmatized and privileged identities. It takes a highly reflective and perceptive anthropologist to get respondents to open up about these most personal aspects of their lives. Mitchell has accomplished this, providing the reader a precious insight into a site of transnational commercial sex that will greatly advance our conversations about racialized sexualities and sexualized races within the Americas. This exceptional ethnography belongs on the reading list not only of scholars and students of anthropology, gender and queer studies, but also to those interested in American Studies and the intra-continental sexual economies within the Americas.”
— American Studies