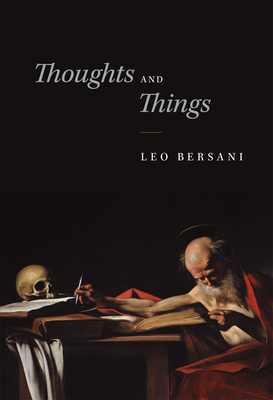 Leo Bersani’s career spans more than fifty years and extends across a wide spectrum of fields—including French studies, modernism, realist fiction, psychoanalytic criticism, film studies, and queer theory.  Throughout this new collection of essays that ranges, interestingly and brilliantly, from movies by Claire Denis and Jean-Luc Godard to fiction by Proust and Pierre Bergounioux, Bersani considers various kinds of connectedness.

Thoughts and Things posits what would appear to be an irreducible gap between our thoughts (the human subject) and things (the world). Bersani departs from his psychoanalytic convictions to speculate on the oneness of being—of our intrinsic connectedness to the other that is at once external and internal to us.  He addresses the problem of formulating ways to consider the undivided mind, drawing on various sources, from Descartes to cosmology, Freud, and Genet and succeeds brilliantly in diagramming new forms as well as radical failures of connectedness. Ambitious, original, and eloquent, Thoughts and Things will be of interest to scholars in philosophy, film, literature, and beyond.

Leo Bersani is professor emeritus of French at the University of California, Berkeley, and the author of numerous books.

"Thoughts and Things accomplishes more in its pages than some full bookshelves in my office. This is an original and intellectually consequential book that will become, like multiple past books by Bersani, a classic.”
— Zahid R. Chaudhary

"It is one of the miracles of intellectual possibility that Leo Bersani, an indispensable thinker of disjunctions in the self and the intractability of violence, should also be our greatest theoretician of relational connectedness. The essays collected in Thoughts and Things show Bersani at the height of his powers, unpacking the paradox by which his theory of connectedness, of the relations that unite us in the oneness of being, rests not on a simple opposition to negativity but rather on a non-relation to it. In the tension informing that paradox, Thoughts and Things offers its readers the thing we so rarely get to encounter: the high-voltage current of living thought."
— Lee Edelman, Tufts University

“From our preeminent philosopher of relationality comes a stunning meditation on the oneness of being.  With great tact and sophistication, this book mounts a critique of the misguided dualisms that separate self from world, mind from body, consciousness from the unconscious, and past from present.  In its ambition and originality, Thoughts and Things is classic Bersani, offering readers conceptually dense formulations—‘psychic time is unitary mobility’—that no other contemporary thinker could plausibly have uttered.”
— Tim Dean, SUNY-Buffalo

"Thoughts and Things is a thrilling meditation on the relational—on what connects authors to readers, authors to themselves, the actual to the virtual, the mind to the body, the drive to the stars, and our systems of thought to the universe. Embedded in this meditation are brilliant readings of a number of individual books, essays and films, ranging from Jean Genet’s Our Lady of the Flowers and Claire Denis’s Beau Travail, to Sigmund Freud’s 'A Special Kind of Object Choice,' and Lawrence Krauss’s Universe from Nothing. Thoughts and Things also offers a provocative account of 'conception.' It is Leo Bersani’s best book—to date."
— Kaja Silverman, University of Pennsylvania

“Bersani offers essays dealing with the metaphysical question of relations: of authors to their readers, of authors to other authors, of the mind to the body, of citizens to the state, of gender to personal identity, and so on. . . . Decidedly non-analytic in its approach, Bersani’s argument rests principally on analyses of films and literary works: Claire Denis’s film Beau travail, Jean Genet’s novel Our Lady of the Flowers, Pierre Bergounioux’s book La Casse, to name just three. It is certainly an interesting approach to a traditional problem, perhaps not an approach that will appeal to Anglo-American philosophers but one that will likely interest Continental philosophers and those working in film theory, gender studies, and related disciplines in English studies. Recommended.”

“The six essays in this collection are suffused with an urgent sense of discovering more to say about familiar subjects: Descartes, Freud, Proust, literature, film, queer theory.”

“Throughout his career, Bersani has shown us ways to resist structures that oppress and to discover modes of relatedness to the world around us…. He is concerned with the tendency of social structures to classify, to create legitimate and non-legitimate groups, because these structures derive power from our willingness to accept the identities they impose upon us.”

“The energy in these essays derives from Bersani’s attempts to imagine escapes from dualistic thinking and restrictive structures.”
— Daniel A. Burr