Hope on Earth: A Conversation (Hardcover) 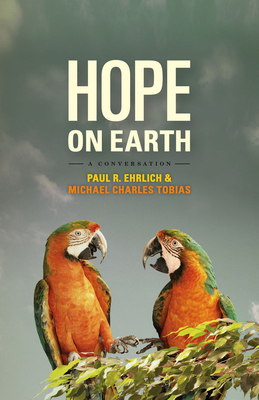 Hope on Earth is the thought-provoking result of a lively and wide-ranging conversation between two of the world’s leading interdisciplinary environmental scientists: Paul R. Ehrlich, whose book The Population Bomb shook the world in 1968 (and continues to shake it), and Michael Charles Tobias, whose over 40 books and 150 films have been read and/or viewed throughout the world.  Hope on Earth offers a rare opportunity to listen in as these deeply knowledgeable and highly creative thinkers offer their takes on the most pressing environmental concerns of the moment.

Both Ehrlich and Tobias argue that we are on the verge of environmental catastrophe, as the human population continues to grow without restraint and without significant attempts to deal with overconsumption and the vast depletion of resources and climate problems it creates. Though their views are sympathetic, they differ in their approach and in some key moral stances, giving rise to a heated and engaging dialogue that opens up dozens of new avenues of exploration.  They both believe that the impact of a human society on its environment is the direct result of its population size, and through their dialogue they break down the complex social problems that are wrapped up in this idea and attempts to overcome it, hitting firmly upon many controversial topics such as circumcision, religion, reproduction, abortion, animal rights, diet, and gun control.  For Ehrlich and Tobias, ethics involve not only how we treat other people directly, but how we treat them and other organisms indirectly through our effects on the environment.  University of California, Berkeley professor John Harte joins the duo for part of the conversation, and his substantial expertise on energy and climate change adds a crucial perspective to the discussion of the impact of population on global warming.

This engaging and timely book invites readers into an intimate conversation with some of the most eminent voices in science as they offer a powerful and approachable argument that the ethical and scientific issues involved in solving our environmental crisis are deeply intertwined, while offering us an optimistic way forward. Hope on Earth is indeed a conversation we should all be having.

Paul R. Ehrlich lives in California, where he is the Bing Professor of Population Studies and the president of the Center for Conservation Biology at Stanford University.  He is the author or coauthor of many books, including, The Population Bomb, The Dominant Animal: Human Evolution and the Environment, and Humanity on a Tightrope: Thoughts on Empathy, Family, and Big Changes for a Viable Future.

Michael Charles Tobias is an ecologist, author, filmmaker, and president of the Dancing Star Foundation, a nonprofit organization based in California and focused on international biodiversity conservation, global environmental education, and animal protection. His works include World War III: Population and the Biosphere at the End of the Millennium, Sanctuary: Global Oases of Innocence, and the recent feature film trilogy No Vacancy, Mad Cowboy, and Hotspots.

“This book, about the state of the world, takes the form of a dialogue between two eloquent writers, Ehrlich and Tobias.  Why read a dialogue, instead of the usual book written from beginning to end by one author?  The Greek philosopher Plato figured out the answer over 2,000 years ago: a dialogue can be much more exciting than a monologue, because it offers the human interest of a conversation, and it offers two rather than just one point of view.  Whether or not you think that you already understand the state of the world, you’ll enjoy and learn from this vivid dialogue.”
— Jared Diamond, author of The World Until Yesterday

“More rare than Coelacanths embracing, these two giants in their fields, Ehrlich and Tobias, intertwine and entertain with their discourse on the future of our world and incredibly they offer us hope.”
— William Shatner

“Authored by two fine thinkers—practical ecologists and eloquent writers—this clever book shakes us with the discomforting view of how human hands are pushing the planet down the plughole, but ends up lifting us from the gloom and doom. These are eloquent arguments, beautifully written, that show a way through the minefield to a quiet, unspoiled, or reclaimed place of beauty: the Earth as it should be, once was, and can be again.”
— Ingrid Newkirk, president, PETA

“Tobias and Ehrlich are master teachers giving all seven billion of us a well-reasoned warning for what lies ahead.  While their science is flawless and persuasive, their message is delivered with serenity and common sense.  This is a book that will be especially effective for our oblivious young who will be saddled with the mistakes of the past.  It is going to all seven of my children!”
— Graham Arader

“Exhilarating! With minds ablaze, Ehrlich and Tobias begin to talk, and right away they disagree. Roaming through wilds of philosophy, history, culture, politics, religion, and science, they debate the fate of the earth. Filled with ideas, insight and personality, Hope on Earth is a joy ride for the mind.”
— Karole Armitage, artistic director of Armitage Gone! Dance Company

“Oh, to have been a fly on the wall during the meeting between these two environmental giants that took place during a couple of days at the Rocky Mountain Biological Laboratory. For dedicated environmentalists, this book is the next best thing. . . . A brilliant, absorbing, and timely discussion of the most pressing issues of the day conducted by two of the world’s foremost environmental experts.”
— Booklist

“For those wearied by the malaise enveloping high-level negotiations on planetary ills, these ‘bilateral talk’' between biologist Paul Ehrlich and ecologist Michael Charles Tobias offer relief. Their often heated dialogue on the scientific, ethical and conceptual approaches to our global predicament is cogent on details such as the realities of unsustainable livestock farming, or the broken equation of population and resources. Despite the grim litany, their action plan for humanity — such as limiting family size — is convincing.”

“Their dialogue is both thought provoking and easy to read, and Hope on Earth would make a great read for people who are interested in the complexities of climate change but don’t want to struggle through an academic-style book.”
— Tweed's

“Hope on Earth offers a fresh look at the serious environmental challenges we face. Unlike other environmental texts, this book emphasizes the severity of the situation in an open and honest exchange between two knowledgeable thinkers. Their conversation is earthy (forgive the pun!) and even raw at times. . . .  Hope on Earth leaves little doubt how much worse our environmental problems will become unless we are moved to action, and soon.”
— Washington Independent Review of Books

“We are on the verge of an environmental catastrophe. The growing human population, unchecked consumption, and depletion of resources could very well spell disaster. Ehrlich and Tobias agree on that, but the two environmental scientists differ on their proposed solutions. In their wide-ranging conversation—pulled from discussions over a couple of days at the Rocky Mountain Biological Laboratory—the two discuss everything from culture, to science, to religion, to politics as they debate the earth’s—and our—fate.”
— Audubon

"Ehrlich made his first big splash in 1968 with The Population Bomb. Writer/filmmaker Tobias has also made environmental conservation his life work. Their illuminating conversation about ethics, ambiguity and how to grapple intelligently with complex environmental threats should attract anyone who despairs of reconciling reality with their ideals."
— Toronto Star

“The conversation in Hope on Earth is strongest when it redirects our ethical attention to issues that matter for the planet, and it does that on nearly every page. It’s openness to different approaches – its reliance on virtue ethics – is refreshing even though it never calls it by that name.”
— Center for Energy, Environment, and Sustainability