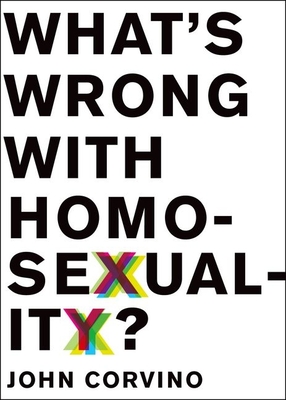 By John Corvino
$37.74
Special Order from the publisher

For the last twenty years, John Corvino--widely known as the author of the weekly column "The Gay Moralist"--has traversed the country responding to moral and religious arguments against same-sex relationships. In this timely book, he shares that experience--addressing the standard objections to homosexuality and offering insight into the culture wars more generally. Is homosexuality unnatural? Does the Bible condemn it? Are people born gay (and should it matter either way)? Corvino approaches such questions with precision, sensitivity, and good humor. In the process, he makes a fresh case for moral engagement, forcefully rejecting the idea that morality is a "private matter." This book appears at a time when same-sex marriage is being hotly debated across the U.S. Many people object to such marriage on the grounds that same-sex relationships are immoral, or at least, that they do not deserve the same social recognition as heterosexual relationships. Unfortunately, the traditional rhetoric of gay-rights advocates--which emphasizes privacy and tolerance--fails to meet this objection. Legally speaking, when it comes to marriage, "tolerance" might be enough, Corvino concedes, but socially speaking, marriage requires more. Marriage is more than just a relationship between two individuals, recognized by the state. It is also a relationship between those individuals and a larger community. The fight for same-sex marriage, ultimately, is a fight for full inclusion in the moral fabric. What is needed is a positive case for moral approval--which is what Corvino unabashedly offers here. Corvino blends a philosopher's precision with a light touch that is full of humanity and wit. This volume captures the voice of one of the most rational participants in a national debate noted for generating more heat than light.

John Corvino is Associate Professor and Chair of Philosophy at Wayne State University. A frequent speaker on LGBT issues, he has presented his talk "What's Wrong with Homosexuality?" and related programs at over 200 universities and other venues. He is the co-author (with Maggie Gallagher) of Debating Same-Sex Marriage (OUP, 2012). As "The Gay Moralist," he was a regular columnist for 365gay.com; his writing has also appeared in The Advocate, The Los Angeles Times, The New Republic online, and The New York Times online. An award-winning teacher, he is also the recipient of a 2004 Spirit of Detroit Award from the Detroit City Council for his work on behalf of LGBT rights.