Out in the Periphery: Latin America's Gay Rights Revolution (Paperback) 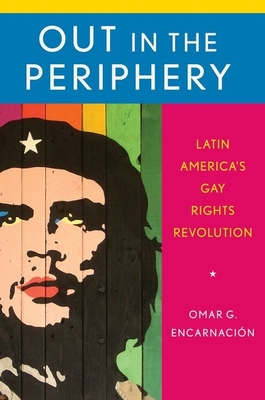 Known around the world as a bastion of Catholicism and machismo, Latin America has emerged in recent years as the undisputed gay rights leader of the Global South. Even more surprising is that several Latin American nations have surpassed many developed nations, including the United States, in
legislating equality for the LGBT community. So how did this dramatic and unexpected expansion of gay rights come about? And why are Latin American nations diverging in their embrace of gay rights, a point highlighted by the paradoxical experiences of Argentina and Brazil? Argentina, a country with
a dark history of repression of homosexuality, legalized same-sex marriage in 2010, a first for a Latin American nation; and since then it has enacted laws to ensure transgender equality, to abolish ex-gay reparative therapy, and to provide reproductive assistance to same-sex couples. By contrast,
Brazil, a country famous for celebrating sexual diversity, proved incapable of legalizing same-sex marriage via the legislature, leaving the job to the courts; and Brazilian anti-gay discrimination laws are among the weakest in Latin America. In Out in the Periphery, Omar G. Encarnaci n breaks away from the conventional narrative of Latin America's embrace of gay rights as a by-product of the global spread of gay rights from the developed West. Instead, Encarnaci n aims to decenter gay rights politics. His intention is not to
demonstrate how the local has trumped the global in Latin America but rather to suggest how domestic and international politics interacted to make Latin America one of the world's most receptive environments for gay rights. Economic and political modernization, constitutional and judicial
reforms, and the rise of socially liberal governments have all contributed to this receptivity. But the most decisive factor was the skill of local activists in crafting highly effective gay rights campaigns. Inspired by external events and trends, but firmly grounded in local politics and
realities, these campaigns succeeded in bringing radical change to the law with respect to homosexuality and, in some cases, as in Argentina, in transforming society and the culture at large.