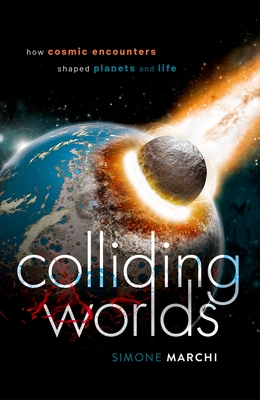 Simone Marchi presents the emerging story of how cosmic collisions shaped both the solar system and our own planet, from the creation of the Moon to influencing the evolution of life on Earth. The Earth emerged out of the upheaval and chaos of massive collisions in the infancy of the Solar System, more than four billion years ago. The largest of these events sent into orbit a spray of molten rocks out of which the Moon coalesced. As in ancient mythological tales, this giant catastrophe
marks the birth of our planet as we know it. Space exploration has shown that signs of ancient collisions are widespread in the Solar System, from the barren and once-habitable Mars to the rugged asteroids. On Earth these signs are more subtle, but still cataclysmic, such as the massive asteroid strike which likely sparked the demise of the
dinosaurs and many other forms of life some 66 million years ago. Signatures of even more dramatic catastrophes are concealed in ancient rocks. These events wreaked havoc on our planet's surface, influencing global climate and topography, while also enriching the Earth with gold and other rare
elements. And recently, modern science is finding that they could even have contributed to developing the conditions conducive to life. In Colliding Worlds, Simone Marchi explores the key role that collisions in space have played in the formation and evolution of our solar system, the development of planets, and possibly even the origin of life on Earth. Analysing our latest understanding of the surfaces of Mars and Venus, gleaned
from recent space missions, Marchi presents the dramatic story of cosmic collisions and their legacies.

Dr. Simone Marchi is a Principal Scientist at Southwest Research in Boulder, Colorado. His interests cover the formation and geology of the terrestrial planets, the Moon, and asteroids. He is Deputy Project scientist for the NASA Lucy mission, and Co-Investigator of the NASA Psyche mission, NASADawn mission, and ESA BepiColombo. He is a member of the science teams of the ESA JUICE and Rosetta missions. Marchi won the international Farinella Prize and NASA's Susan Mahan Neibur Early Career Award for his studies of the impact histories of terrestrial planets and asteroids and early evolutionof the Solar System. He is also the recipient of several NASA and ESA mission group achievement awards, and has an asteroid named after him by the International Astronomical Union: Asteroid 72543 Simonemarchi. His work is regularly featured on the news.