Magic by the Lake (Tales of Magic #2) (Paperback) 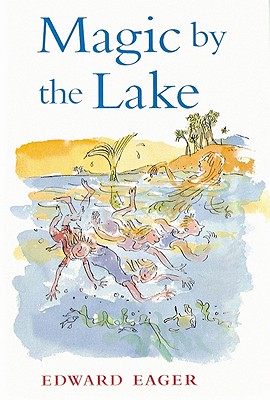 By Edward Eager, N. M. Bodecker (Illustrator)
Out of Print

This is book number 2 in the Tales of Magic series.

When wishing for magic, it's hard not to wish for too much.
If Jane, Mark, Katharine, and Martha had stopped to think—oh, if they had only stopped to think!—they would have ordered magic by the pound, or by the day, or even by the halves as they had in Half Magic.
But no, they asked for magic by the lake—and now they have to deal with a whole lakeful of enchantment!
Soon the children are awash in magic. They find themselves cavorting with mermaids, outwitting pirates, and—with the help of a cranky old turtle—granting a little magical help to the one person who needs it most.

Edward Eager (1911–1964) worked primarily as a playwright and lyricist. It wasn’t until 1951, while searching for books to read to his young son, Fritz, that he began writing children’s stories. His classic Tales of Magic series started with the best-selling Half Magic, published in 1954. In each of his books he carefully acknowledges his indebtedness to E. Nesbit, whom he considered the best children’s writer of all time—“so that any child who likes my books and doesn’t know hers may be led back to the master of us all.”

"The combination of real children and fantasy is convincing and funny."  —Booklist

"The same mélange of realism and fantasy, witty talk and believable characterization that has come to be the hallmark of Mr. Eager’s stories.”  —The New York Times Book Review