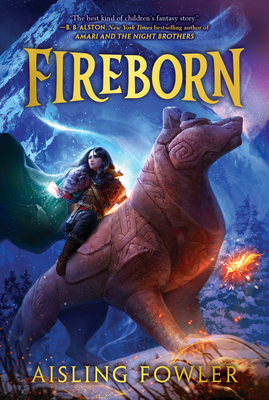 This is book number 1 in the Fireborn series.

Lyra. Lucy. Percy. Once in a generation, a hero emerges whose story enthralls readers worldwide.

Fireborn is an epic quest, perfect for fans of the His Dark Materials and The School for Good and Evil series, that will spin readers into a magical world like no other—and introduce them to an unforgettable new heroine named Twelve.

Ember is full of monsters.

Twelve gave up her name and identity to train in the art of hunting them—so she says. The truth is much more deadly: she trains to take revenge on those who took her family from her.

But when Twelve’s new home is attacked, she’ll find herself on an unexpected journey, where her hidden past is inescapably intertwined with her destiny—and the very fate of her world.

Aisling Fowler was born in 1985 and wishes that she had grown up in a magical, mountainous kingdom, but was actually raised in Surrey on a diet of books and Buffy the Vampire Slayer. Her early "adventure" stories involved surprisingly little action and her first novel (three pages long) was politely declined by publishers at age 11. After earning a BSc in Biology and working as a support worker and then a nurse, the idea for her debut novel, Fireborn, came to her as she moved back and forth between London and the US. Now based in Hackney, when she is not reading or writing, Aisling loves cooking and plotting adventures (for herself as well as her fictional characters).

"Fireborn is a thrillingly assured debut that grips from the get-go. Featuring a fiercely charismatic heroine and a cast of extraordinary companions, it transports the reader to a fascinating landscape of ice and peril. Aisling Fowler conjures up the perfect balance of high adventure, breathless action and eerie wonder, mixing it all with scenes of genuine emotional power. Elegantly structured, endlessly exciting, Fireborn is the perfect introduction to a rich and magical new world." — Jonathon Stroud, New York Times bestselling author of the Lockwood & Co and Bartimaeus series.

"Fireborn is the best kind of children’s fantasy story, thrilling and imaginative while packing an emotional punch. It’s sure to have young readers clamoring for more!"  — BB Alston, New York Times bestselling author of Amari and the Night Brothers

“A quest that’s about inner knowledge and cooperation… Lovers of bloody fantasy epics will be glad to have another.” — Kirkus Reviews

“A gripping tale, packed with twisty reveals, spectacularly sinister creatures, elaborate backstories, and surprising humor to lighten the story. This tale of fighting and forgiveness, of revenge and adventure, is a beautiful reminder that there is always time to become the person you truly want to be.” — Booklist