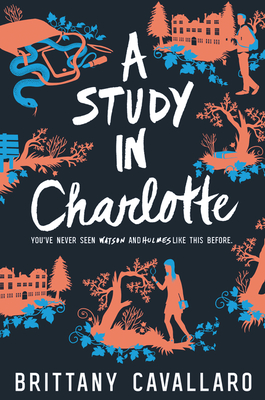 This is book number 1 in the Charlotte Holmes Novel series.

The first book in a witty, suspenseful new series about a brilliant new crime-solving duo: the teen descendants of Sherlock Holmes and John Watson. This clever page-turner will appeal to fans of Maureen Johnson and Ally Carter.

But when a student they both have a history with dies under suspicious circumstances, ripped straight from the most terrifying of the Sherlock Holmes stories, Jamie can no longer afford to keep his distance. Danger is mounting and nowhere is safe—and the only people they can trust are each other.

Brittany Cavallaro is the author of the New York Times bestselling Charlotte Holmes series and the poetry collection Girl-King. She earned her BA in literature from Middlebury College and her MFA in poetry from the University of Wisconsin–Madison. She lives in Michigan. Find her at her website, www.brittanycavallaro.com, or on Twitter @skippingstones.

“A thrilling twist on a classic. Readers will be pulled in by both the riveting mystery and Charlotte Holmes, a brilliant heroine with secrets of her own.” — Maureen Johnson, New York Times bestselling author of the Shades of London series

“Debut author Cavallaro brings Arthur Conan Doyle’s sleuths (or their distant relatives, anyway) into the 21st century, casting Holmes as a brilliant young woman and Watson, who narrates, as her admirer and accomplice...An involving murder mystery, and a promising start to a planned trilogy.” — Publishers Weekly

“Fans of television’s Elementary and Sherlock will avidly devour this book...a joyous excuse to watch one of the literary world’s most beloved pairings come together.” — Booklist