I Shudder: And Other Reactions to Life, Death, and New Jersey (Hardcover) 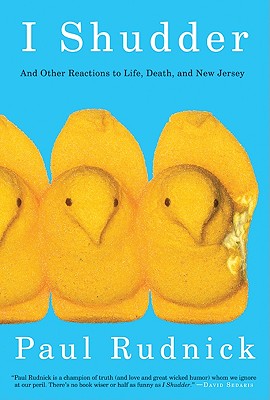 By Paul Rudnick
Out of Print

I Shudder is a side-splittingly funny collection of essays from Paul Rudnick, one of ’s preeminent humorists. Rudnick, who writes for The New Yorker and has written the screenplays for the films In and Out, Sister Act, and Addams Family Values, shares his hilarious observations on life in and , the perils of show business, and dealing with one’s family, however crazy they may be. As David Sedaris says, “There’s no book wiser or half as funny as I Shudder.”

Playwright, screenwriter, and novelist Paul Rudnick's celebrated works include the plays I Hate Hamlet and Jeffrey, and the screenplays In & Out and Addams Family Values. He also writes regularly for The New Yorker. Born in Piscataway, New Jersey, he now lives in New York City.

“Paul Rudnick is a champion of truth (and love and great wicked humor) whom we ignore at our peril. There’s no book wiser or half as funny as I Shudder.”
— David Sedaris

“Uproariously self-deprecating essays about being gay and Jewish in suburban New Jersey and downtown Manhattan...The vignettes that give the book its title offer...irresistible screeds against the indignities of modern urban life.”
— New York Times Book Review

“The witty, sardonic playwright (Jeffrey) and screenwriter (In & Out, Addams Family Values) delivers an acerbic and entertaining memoir about his experiences as a child in New Jersey and an adult in showbiz.”
— Entertainment Weekly

“Piscataway, N.J. and Hollywood don’t usually have much in common, but writer Paul Rudnick finds absurdity in both.”
— Modern Tonic

“[A] lovable and astute collection of humor pieces...breezy and giddy with zingers, all handcrafted to make their good-natured defiance seem easy...[a] deceptively sweet and droll collection.”
— Newsday

“A laugh-out-loud pleasure to read...[Rudnick] writes with glee and unjudgmental warmth about the bohemian people and places of late 1970s and ‘80s.”
— Asbury Park Press

“A hilarious, often touching hodgepodge. . . . It’s the literary equivalent of the tchotchke, at least as [Paul Rudnick] defines it: ‘Something peculiar which you don’t need, and which has no discernible purpose or value, but which you can’t live without.’” (Four out of four stars)
— People