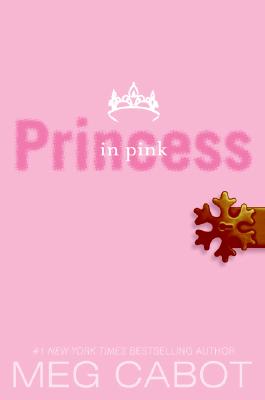 This is book number 5 in the Princess Diaries series.

In her heart of hearts, Mia has but one wish: an evening spent with Michael in a tux and a corsage on her wrist—in other words, the prom. Michael, however, does not seem to share the dream that is the prom. Worse still, a service workers' strike (with Grandmère and Lilly at the heart of it and on opposite sides) threatens the very existence of this year's prom.

Will the strike end in time? Can Mia talk Michael out of his anti-prom views? Most importantly, will Mia get to wear her pink prom dress?

Princess in Pink is the fifth book in the beloved, bestselling series that inspired the feature film starring Anne Hathaway and Julie Andrews. Beautifully repackaged in paperback, this title will appeal to new readers as well as fans looking to update their collection.

Meg Cabot’s many books for both adults and tweens/teens have included multiple global and #1 New York Times bestsellers, selling over twenty-five million copies worldwide. Her Princess Diaries series has been published in more than 38 countries and was made into several hit films by Disney. Meg is still waiting for her real parents, the king and queen, to restore her to her rightful throne. She currently lives in Key West, FL, with her husband and various cats.