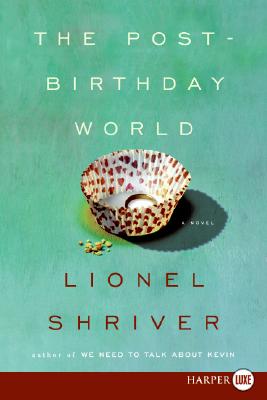 By Lionel Shriver
Out of Print

In this eagerly awaited new novel, Lionel Shriver, the Orange Prize-winning author of the international bestseller We Need to Talk About Kevin, delivers an imaginative and entertaining look at the implications, large and small, of whom we choose to love. Using a playful parallel-universe structure, The Post-Birthday World follows one woman's future as it unfolds under the influence of two drastically different men.

Children's book illustrator Irina McGovern enjoys a quiet and settled life in London with her partner, fellow American expatriate Lawrence Trainer, a smart, loyal, disciplined intellectual at a prestigious think tank. To their small circle of friends, their relationship is rock solid. Until the night Irina unaccountably finds herself dying to kiss another man: their old friend from South London, the stylish, extravagant, passionate top-ranking snooker player Ramsey Acton. The decision to give in to temptation will have consequences for her career, her relationships with family and friends, and perhaps most importantly the texture of her daily life.

Hinging on a single kiss, this enchanting work of fiction depicts Irina's alternating futures with two men temperamentally worlds apart yet equally honorable. With which true love Irina is better off is neither obvious nor easy to determine, but Shriver's exploration of the two destinies is memorable and gripping. Poignant and deeply honest, written with the subtlety and wit that are the hallmarks of Shriver's work, The Post-Birthday World appeals to the what-if in us all.

Lionel Shriver's novels include The New Republic, So Much for That, The Post-Birthday World, and the international bestseller We Need to Talk About Kevin. Her journalism has appeared in The Guardian, the New York Times, the Wall Street Journal, and many other publications.

“Shriver writes with elegance and a loaded intensity...she is a brilliant, witty storyteller and the book is utterly compelling.”
— Weekend Australian

“Shriver writes with much intelligence and wryness....The twofold nature of the plot...makes for enlightening reading.”
— Irish Times

“The Post-Birthday World is a...radical book.”
— The Scotsman

“This is a compulsive, clever, wise and witty novel.”
— The Times (London)

“Shriver is very obviously a perceptive observer and clever chronicler of the human condition, in all its messy, unresolved glory.”
— The Nelson Mail (New Zealand)

“Ingenious....there is an impressive freshness in her treatment. The writing is intelligent, the characterisation thoughtful, the insights into love, sex and snooker sharp. After her acclaimed 2003 novel, We Need To Talk About Kevin, Shriver confirms her reputation as an original talent.”
— Mail on Sunday

“Shriver’s an extraordinary writer. Her perceptiveness of male-female relationships is unsettling, dangerous, familiar and voyeuristic. [The Post-Birthday World is] impossible to put down.”
— Daily Telegraph (Australia

“Extraordinary...Before it was co-opted and trivialized by chick lit, romantic love was a subject that writers from Flaubert to Tolstoy deemed worthy of artistic and moral scrutiny. This is the tradition into which Shriver’s novel fits.”
— Entertainment Weekly