The Post-Birthday World: A Novel (Paperback) 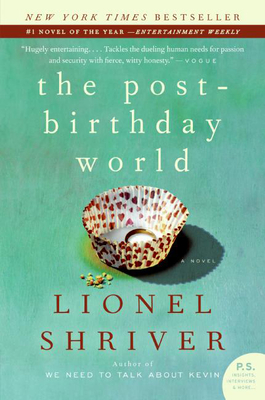 “Complex and nervy, Shriver’s clever meditation will intrigue anyone who has ever wondered how things might have turned out had they followed, or ignored, a life-changing impulse.” — People (Critic's Choice)

Does the course of life hinge on a single kiss? Whether the American expatriate Irena McGovern does or doesn’t lean into a certain pair of lips in London will determine whether she stays with her smart, disciplined, intellectual American partner Lawrence, or runs off with Ramsey—a wild, exuberant British snooker star the couple has known for years. Employing a parallel-universe structure, Shriver follows Irena’s life as it unfolds under the influence of two drastically different men.

In a tour de force that, remarkably, has no villains, Shriver explores the implications, both large and small, of our choice of mate—a subject of timeless, universal fascination for both sexes.

Lionel Shriver's fiction includes The Mandibles; Property; the National Book Award finalist So Much for That; the New York Times bestseller The Post-Birthday World; and the international bestseller We Need to Talk About Kevin, adapted for a 2010 film starring Tilda Swinton. Her journalism has appeared in the Guardian, the New York Times, the Wall Street Journal, and many other publications. She’s a regular columnist for the Spectator in Britain and Harper’s Magazine in the US. She lives in London and Brooklyn, New York.

“Shriver writes with elegance and a loaded intensity...she is a brilliant, witty storyteller and the book is utterly compelling.” — Weekend Australian

“Engaging . . . a testament to Shriver’s ability to make Irina into a thoroughly compelling character, an idiosyncratic yet recognizable heroine about whom it’s impossible not to care.” — New York Times

“Complex and nervy, Shriver’s clever meditation will intrigue anyone who has ever wondered how things might have turned out had they followed, or ignored, a life-changing impulse.” — People (Critic's Choice)

“Unflinching…. One certainty is that Ms. Shriver is not interested in fostering illusions about love….The Post-Birthday World is disturbing because it seems real: Irina’s wavering and soul-searching are not the comic vacillations of Bridget Jones, and the choices she makes are not the pragmatic decisions of an emblematic woman ambitious to ‘have it all.’” — Wall Street Journal

“In The Post-Birthday World and the real world, there are no right or wrong choices. There is only life. It’s messy, but consider the alternative. Shriver does. Meticulously.” — Miami Herald

“A brilliant ‘what if?’ novel. But that barely scrapes the surface in describing Shriver’s imaginative feat…. Shriver holds up a prism, one that refracts a spectrum of possibility in character and consequences…. It’s heady, very grown-up stuff—even when the grown-ups are behaving badly. . . . But what’s most impressive about The Post-Birthday World is its simultaneous cohesion… and unpredictability…. It’s mad genius. Few novelists can so successfully pull off one novel. In a tour de force, Shriver manages two.” — USA Today

“A riveting novel....Refusing to indulge in “happily ever after” fantasies, Shriver has created an adult choose-your-own-ending book, with fascinating results.” — Denver Rocky Mountain News

“Shriver writes with much intelligence and wryness....The twofold nature of the plot...makes for enlightening reading.” — Irish Times

“The Post-Birthday World is a...radical book.” — The Scotsman

“This is a compulsive, clever, wise and witty novel.” — The Times (London)

“Shriver is very obviously a perceptive observer and clever chronicler of the human condition, in all its messy, unresolved glory.” — The Nelson Mail (New Zealand)

“Ingenious....there is an impressive freshness in her treatment. The writing is intelligent, the characterisation thoughtful, the insights into love, sex and snooker sharp. After her acclaimed 2003 novel, We Need To Talk About Kevin, Shriver confirms her reputation as an original talent.” — Mail on Sunday

“Shriver’s an extraordinary writer. Her perceptiveness of male-female relationships is unsettling, dangerous, familiar and voyeuristic. [The Post-Birthday World is] impossible to put down.” — Daily Telegraph (Australia

“Extraordinary...Before it was co-opted and trivialized by chick lit, romantic love was a subject that writers from Flaubert to Tolstoy deemed worthy of artistic and moral scrutiny. This is the tradition into which Shriver’s novel fits.” — Entertainment Weekly